What Does QR Stand For - Quick Response Code

QR codes are a straightforward yet innovative kind of technology. In this article, we will delve deep to answer the question, “what does QR stand for?”, “What are the types of QR codes” and more.

What is A QR Code?

Quick response codes can help businesses improve sales and foot traffic. They are also hygienic, meaning there’s less chance of people getting infectious diseases. Because of this, most restaurants and bars are tapping their power to leverage touch-free ordering. 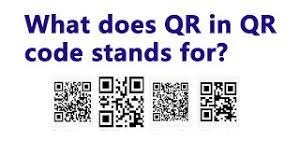 Who Invented the QR Code and What Does QR Stand For?

QR or quick response codes are device-readable optical labels that hold various information. It is like a barcode but a more sophisticated one. One of its differences is that it is two-dimensional.

While traditional barcodes are arranged vertically, QR codes have square shapes. You can scan the former with a beam of light and often see them in stores or warehouses. Information is stored in one-dimensional vertical bars that are separated by distance.

Meanwhile, QR codes keep the information you input on their horizontal and vertical square patterns. They consist of multiple small squares, and once you scan them, it provides information that may include price, website links, forms, and more.

QR codes were invented in 1994 by Masahiro Hara, who was working for the Japanese company Denso Wave.

How Does A QR Code Work?

QR codes have black squares and white dots that are scannable. When you point your scanner toward them, the code translates into human-readable data so you can decipher it. The process lasts seconds. To know more about “what does QR stand for” briefly, contact our technical experts.

What are the Benefits of QR Codes?

One of the best traits of QR codes is their speed. It quickly delivers the information you need at the speed of light. Through its two-dimensional squares, you can access a ton of data.

Another benefit of using this tool is its reliability. Even though some parts of it are damaged, they remain to be readable.

Next, they are more accessible as compared to standard barcodes. You can scan them using common digital devices, such as phone cameras. Most smartphones and tablets now have built-in scanners.

QR codes are easy to use and maintain. If you run a restaurant, you don’t have to build a menu and ask people to download it. You only need to point the camera to the code, and it will bring you to the link you entered on the code.

What are The Two Different Types of QR Codes?

You can choose between the two types of codes – dynamic and static. Their difference lies in the way they save information.

It is fixed and cannot be edited. Depending on the size of the information you’re storing, the size and complexity of the code will change. Large and complicated sets of characters may take some time to scan.

But the most significant disadvantage of it is its editability. The original information you put on the code will remain unchangeable. You will have to build a new one if you are going to put further information.

That said, it’s preferable for one-time situations like events or manufacturing.

A dynamic QR code is editable. You can change its contents no matter how many times you like. It eliminates the hassle of creating a new code whenever the information changes.

Since its data modules only have one URL, dynamic codes look simpler and can load quickly. It also lets you track where the scan came from, the time, and the device used.

Dynamic QR codes are the most promising option for most applications. They’re not complicated to create, and they offer versatility. If your business often changes the products you sell, you’ll benefit from it. If you require editing information often – for instance, coupons or digital menus – you can try using dynamic codes. It’s also a good idea to share any nutritional information or food labels here.

Where Do You Use A QR Code Scanner?

QR code scanners let you decipher or read QR codes by pointing the camera at them. You may use it to:

What Is a QR Code Generator?

A QR code generator app is a tool that creates quick response codes. Via this code, users can go to a video, a text, a photo, or a website without typing website URLs or searching keywords. Scanning it will direct you to your destination. To know more about “what does QR stand for” briefly, reach our professionals.

Many apps allow you to create codes with ease. One of them is FormBot. Start generating forms today with our app and turn them into scannable codes.

How to Make a QR Code